One aspect of the Emerald Princess that I really enjoyed on this South American cruise was the, for the lack of a better word, a lecture series.  One of the lecturers was from South America and he would give a port talk each day.  Having been on many other cruises and cruise lines, that usually translates to port shopping.  You know where they tell us to shop at Diamonds International or purchase a shirt from Del Sol.  I stay away from those talks like the plague – just my opinion.

With that being my impression I actually skipped the first port talk – BIG mistake.  Blogger Hubby went and reported back that it was very interesting and it was actually about the city we were docking in and what was around it, what we should see and do.  There was no talk of selling excursions or which one you should take.  It was information, imagine that!

With that in mind, I did not miss the next one which was on Punta Arenas, Chile.  This was a port that we had nothing planned and was going to just wing it.  After showing us photos of the town and what laid just outside the town we felt more confident in our decision to just walk around.  Punta Arenas is on the Strait of Magellan which connects the Atlantic Ocean with the Pacific Ocean.  It is a beginning point for many expeditions into the surrounding area of Patagonia as well as a jumping off point for travel to Antarctica.

As we disembarked from our tender, we notice a small terminal building where we could make purchases but for us we decided to look in town.

This sprawling city was just a 10-15 minute easy walk from where we were docked.  After wandering and poking in stores a little bit we finally made it to the town square where there was a large monument of Ferdinand Magellan.

In South America, one of my goals was to buy alpaca yarn to bring home and hopefully knit some socks, a hat or a sweater.  As you are entering the town square coming from the dock go up the street to the left of the monument and in the second or third block there is a store that has lots of hats in the window.  The store doesn’t look like much but don’t let that deter you from going inside.  Their hats and sweaters were made and knitted in the style of traditional patterns.  They had ponchos, jackets, mittens, etc.  I found was able to purchase a beautiful hat and some yarn to bring home.  Yarn can be bulky but it weighs next to nothing.

Following our lecture’s advice, we hailed a cab and had him take us to the Nao Victoria Museum where they had replicas of famous ships.  It was about $8 and when we got there he had another driver ask us if we wanted him to stay there and wait for us – price would be $15.  We quickly said yes as we were about 8 km from town.

At the outdoor museum there was a replica of Ferdinand Magellan’s ship, The Victoria.  When you see the size of it and think about his journey about the world it is just simply amazing.  There is no other way to describe the small cramped quarters, this small ship that sailed down the western coast of Africa, crossing  the Atlantic Ocean, through the treacherous Straits and other bodies of water as he was looking for a westward route through South America, across the Pacific and Indian Oceans and up the west coast of Africa again.  What these explorers did with 16th century navigation and tools is astonishing tome.

The museum also houses the James Caird lifeboat of the Endurance, which sailed from Elephant Island to South Georgia during Sir Ernest Shackleton’s failed 1916 Imperial Trans-Antarctic Expedition. The feat, considered by many to be the most impressive of all global navigation, has gone down in history and is brilliantly recounted in Shackleton’s personal account, South: The Endurance Expedition.  Angela, the other lecturer on board the ship, gave a presentation on Ernest Shackleton as well as the expedition.  Seeing the boat and knowing the conditions that these men sailed in to find help for their crew mates is astonishing.

The other ship that we looked at was Charles Darwin’s Beagle.  The first voyage of the Darwin saw it conducting a survey around Tierra del Fuego.  Charles Darwin wrote his diary on the second voyage with illustrations and notes about what he saw. 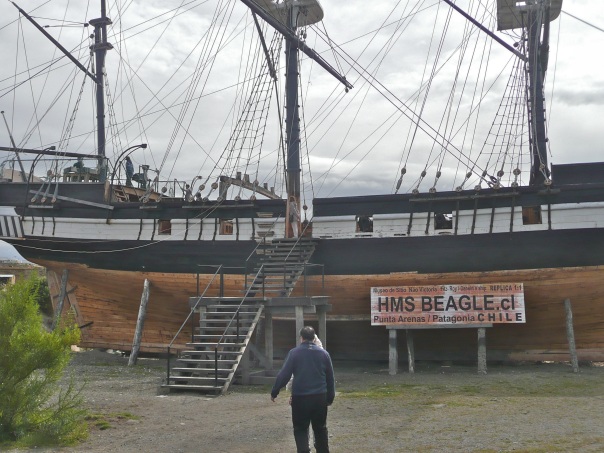 This outdoor museum is well worth the time and money to visit.  As I mentioned, it cost us about $5 USD for our cab driver to take us there, wait and then take me to a grocery store to purchase some wine to bring on board and take us back to the dock.  In my mind, that is quite affordable.  Unfortunately I do not remember the price to get into the museum.  I would say to spend less than an hour here.  For me, it was exciting to stand along the Strait of Magellan – I mean, I remember learning about this strait that connected the Atlantic with the Pacific Ocean with Magellan being the first European to sail it.

As a side note:  do you know what Tierra del Fuego means?  Land of Fire.  The native population of Tierra del Fuego wore very little clothing and when you think of the terrain you’ll know why.  To keep themselves warm they would have many little fires all around.  The Europeans when they came to this land would see the flickering light at night and it became known Tierra del Fuego – Land of Fire.

Although I wore my packable down jacket with a sweater underneath, it was never zipped and half the time I took it off and put it in its bag.  I think instead I cold have worn a wind breaker.  We were extremely fortunate with weather during this cruise – we never had rain, or extreme cold. The most we had was cool/ very cool and windy (Falkland Islands) but not knowing what the weather is like you will have to layer and be prepared.  The Emerald Princess did sell some reasonably priced jackets if you needed something more than what you brought with you.

Next Up – Ushuaia, Argentina