“This land is your land, this land is my land.  From California to the New York island.”  That song always goes through my mind when I am traveling across our vast country and see the many differences.  This is our land and we need to spend time exploring and getting to know it. Foreign travel is exciting but traveling within our own country allows me to see the grandeur of our country and many spots that are very eyeopening and educational.  I think that sometimes I have preconceived ideas of what areas should look like or what I will find there. Most times I have been proven wrong. Sort of like judging a book by its’ cover and we all know that we shouldn’t do that.

As we sat by the window traveling through New Mexico it somewhat reinforced in both of our minds what we thought the landscape of New Mexico would be – somewhat flat with mesas, buttes, orange/red soil or clay and small little bushes popping up here and there.

When we arrived in Albuquerque, ending our epic Train Trek, we took a cab to pick up our rental car at at the airport, then we got some lunch (at Twisters – a delicious semi-fast food restaurant) and then began our drive toward Santa Fe for our first of five nights in New Mexico.

We had been told that there are two ways to drive to Santa Fe and we chose the more scenic route which is known as the Turquoise Trail National Scenic Byway.  This is off the main highway and takes about an hour to travel between Albuquerque and Santa Fe.  This trail was well known as a site for the rich deposits of turquoise, gold and iron ore.  You can find in this area the rare blue green turquoise names after the town of Cerrillos.  There are a few towns on the Turquoise Trail and they tend to be more artist’s havens.  Stop in some of the cafes along the trail for a bite to eat, go in the gift shops and look at the silver and  turquoise jewelry.  One shop that we stopped in at Madrid had turquoise that the elderly owner mined herself.  How many shop owners can say that? 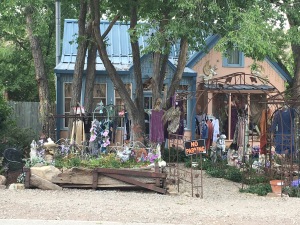 Santa Fe has some wonderful restaurants restaurants and a preacher on our train from Albuquerque advised us to eat at Tomasita’s for authentic New Mexican food that is family run.  Of course we had to obey the preacher.  Fairly easy to find and like all good restaurants, there was a line.  Food was delicious though it was a bit hot for this northern girl – even the green salsa.  They waiters wanted to make sure that I enjoyed this experience and with their help, I did.

Santa Fe has the most charming plaza of all of the cities that we visited.  I had looked forward to the Georgia O’Keefe museum which is only a couple of blocks from the center of the plaza.  I was able to get the last ticket to go on a docent led tour of her work and learned about her background – fascinating.  I think we all know her for her famous red poppy painting (which is only about 7 inches) but did you know she was also an abstract painter?  She painted many landscape scenes though they were of two themes familiar to her – the area around Lake George area where she would spend her summers with her husband and those of Texas and New Mexico with the beautiful colors of the mesas and skies that she grew to love.  Her personal story is very compelling as  well and you learn about her personal life at the museum.  I would highly recommend this museum.

Walking to the Georgia O’Keefe museum we passed by shops that had animal sculptures along the street.  Blogger Hubby and I loved whimsical and fun sculptures.  What do you think of these? 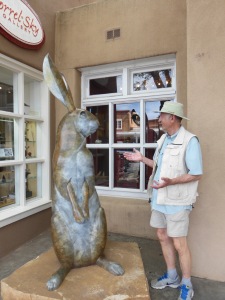 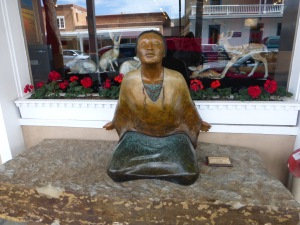 The Palace of the Governors  is within the Santa Fe Historic District along the plaza downtown and it served as the seat of government for the state of New Mexico for many centuries. The Palace of the Governors is the oldest continuously occupied public building in the United States. Outside the building on the portico you’ll find native Americans selling their pottery, jewelry, metal work, drums, leather items, drawings, paintings and so much more. My word of advice, if you choose to purchase, which I did, pay in cash and do not bargain – it is an insult to the Native American vendors whose prices are very fair and less than what you would pay in one of the shops along the plaza.  They also have exquisite workmanship on all the wares that they sell.

We also went to the State House, a few blocks from the plaza area.  This is the only state house that is round.  It also has four wing entrances, designed after their state flag.  The four wings represent the four cultures in New Mexico – Angelo, Spanish, Mexican and Native American.

Across the street from the State House was a sign telling us about the Santa Fe Trail  and how it was a main thoroughfare .

We stayed outside the downtown/plaza area at a Holiday Inn using our points.  It was fine – nothing special.  In hindsight, I would have preferred to have stayed along the downtown plaza area.  There is a lot of traffic in this area, parking is tight and it is just a vibrant place to walk around and be.  We would have gone there our first night except for all the traffic.  Learn from my mistake and stay by the plaza.