This is the first in a series of visiting National Parks throughout our country:

When our children were younger and money was a little tighter, we would make a vacation out of camping and visiting our National Parks.   When we lived in New England we didn’t visit many National Parks for the simple reason that we didn’t have many.  In fact, we only had one in all of New England – Acadia National Park in Maine. It wasn’t until we moved to Virginia that we were able to visit more parks. 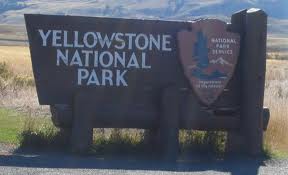 First a little history of Yellowstone National Park – The first National Park was Yellowstone in 1872.  The Northern Pacific Railroad urged Congress to preserve this land but they had an ulterior motive.  The railroad was interested in making this area a major rail destination and they wanted to prevent the park from being misused as well as to stop the poaching of animals on park land.  Yellowstone National Park was being administered by the Department of the Interior.  They had limited legal authority and resources.  The federal government didn’t do a good job of managing the area and to help it, in 1892 the US Army established a fort (Fort Yellowstone) at the northern entrance to the park at Mammoth Hot Spring.  They set up wildlife policy and management that served as a model of what they do today as well as constructing many buildings , many of which are still in use.  The Army continued their management of Yellowstone until 1918 when the National Park Service was established and control of this Park was turned over to NPS.

There are nine places to stay within the Park but my favorite is the iconic Old Faithful Inn.  I use this Inn in which to judge other park service inns and lodges.

With the large log multistory lobby and the massive stone fireplace it truly represents all that is western and rustic and stood as a model for other national park lodges.  In keeping with the rustic nature of this lodge, there is no television, radio, internet or air conditioning.  I am fine with all except the no air conditioning. 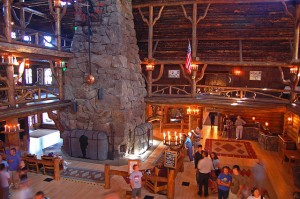 The lodge is adjacent to its namesake, Old Faithful Geyser.  Old Faithful is the largest regular geyser in Yellowstone.  Some think that it erupts every hour on the hour but it doesn’t.  The rangers at Yellowstone can fairly closely guess when the next eruption is but that is about as far as they can guess.  Generally it will erupt from 35 minutes to 2 hours and the length of the erupts varies as well.

Driving through the park you see many cars pulled over to view the nativewildlife such as  bison throughout the park.  Do not go near the wildlife particularly bison.  Respect them and their size.  Also, if you are camping in Yellowstone do no leave any food in your car as the bears will rip your car apart to get the food.  The park has special bear proof containers to put your food in.

Though this is one of my favorite parks, it is not my absolute favorite.  I’ll write about my favorite in another blog.

What parks have you been to?  Do you have a favorite?  I’d love to hear about it.